On November 15, 2019, a 23-year-old Inuk woman named Tama Bennett was found deceased in a wooded area near Happy Valley-Goose Bay in Labrador, 400km from her home. Just hours later, the Royal Canadian Mounted Police (RCMP) issued a report stating that “the death was not considered suspicious”.

The Nunatsiavut Government is calling for an independent police investigation. Johannes Lampe, president of Nunatsiavut, stated “We have reason to believe the RCMP made assumptions as to the cause of death before carrying out a thorough investigation.” Would a non-Indigenous woman’s death have been treated this way by the RCMP?

Exactly two month later, on January 17, 2020, the RCMP provided an update stating that they had just received the autopsy report and that the investigation remains ongoing and cause of death is undetermined.

This lack of responsiveness by the RCMP is a demonstration of the continued devaluing and dehumanization of Indigenous lives. These harmful police practices create further challenges in the relationship between Indigenous communities and the RCMP. They fail to protect Indigenous communities, and perpetuate violence against Indigenous Women, Girls and Two-Spirited Peoples. YWCA Canada supports Nunatsiavut President Johannes Lampe along with community in Labrador, on the call for an independent investigation.

On June 03, 2019 the Final Report of the National Inquiry into Missing and Murdered Indigenous Women and Girls was released. The report includes many recommendations to help address violence directed at Indigenous women, girls, and 2SLGBTQQIA (Two-Spirit, lesbian, gay, bisexual, transgender, queer, questioning, intersex, and asexual) people. We encourage the RCMP to review the Final Report and implement the Calls for Justice, including but not limited to, Calls 9.1, 9.2, 9.5, and 9.6 (enclosed).

Because on this ongoing violence, it is important for us to continuously ask what the RCMP have learned from the Final Report of the National Inquiry into Missing and Murdered Indigenous Women and Girls, and what the RCMP are doing to address systemic racism, sexism, discrimination and biases.

9.2 We call upon all actors in the justice system, including police services, to build respectful working relationships with Indigenous Peoples by knowing, understanding, and respecting the people they are serving. Initiatives and actions should include, but are not limited to, the following measures:

9.5 We call upon all police services for the standardization of protocols for policies and practices that ensure that all cases of missing and murdered Indigenous women, girls, and 2SLGBTQQIA people are thoroughly investigated. This includes the following measures:

Indigenous woman’s, girl’s, or 2SLGBTQQIA person’s file may negatively impact both progress on the investigation and relationships with family members; police services must have robust protocols to mitigate these impacts. 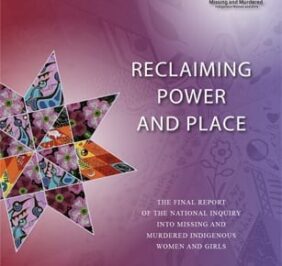 Truth and Reconciliation Commission of Canada - Calls to Action