16 Days of Activism Against Gender-Based Violence

Today marks the start of 16 Days of Activism Against Gender-Based Violence, an international campaign begun by UN Women. From the International Day for the Elimination of Violence against Women on November 25 to Human Rights Day on December 10, this campaign is a space dedicated to supporting survivors and taking action to end gender-based violence.

YWCA Canada and our member associations work every single day to make gender-based violence a thing of the past. As recent attacks on the rights of women and gender diverse folks at home and globally have shown us, this work is more urgent than ever. Every six days, a woman in Canada loses her life to gender-based violence. Escaping an unsafe situation is often a matter of life and death, but the harm of GBV doesn’t stop there. Ending gender-based violence is not as easy as simply walking away.

Leaving is not the only part.

Gender-based violence has a devasting effect on individuals. But its impact doesn’t end there. GBV is reflected in widespread beliefs and behaviours, which shape who gets listened to and whose needs are prioritized when we build social programs and systems. It shows up in the structures that uphold power differentials and place women, girls and gender diverse people at risk for multiple forms of violence and inequality. It effects all of us, everywhere, in our homes, in our workplaces, in our communities.

Gender justice is only possible by ending gender-based violence in all its forms. YWCAs across Canada are supporting survivors and pushing for systems-level change and we can’t do it without you. Over the next 16 days, follow along on our Instagram for ways you can take action for a safe and equitable world. 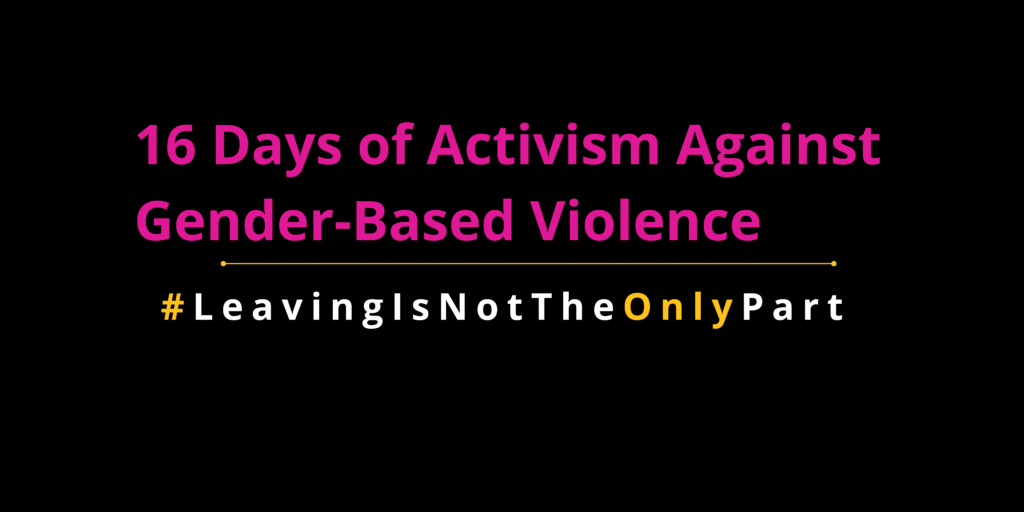