December 6, 2022 – As we observe the 16 Days of Activism on Gender-Based Violence and the National Day of Remembrance and Action on Violence Against Women, the announcement of charges in the murder of four Indigenous women at the hands of an alleged serial killer linked to white supremacist ideology is a tragic indication that the urgent action long called for by Indigenous women, families, and communities to address the ongoing genocide of Indigenous women, girls, Two-Spirt, and gender-diverse people has not been taken.

As organizations and advocates working to end violence against women, girls, Two-Spirit and gender-diverse people, we stand in solidarity with the families, friends, and loved ones of Marcedes Myran and Morgan Harris, both of Long Plain First Nation, of Rebecca Contois of Crane River First Nation, and of Buffalo Woman, and we extend our condolences to all those mourning their loss in Winnipeg, Treaty No. 1 Territory, the traditional lands of the Anishinaabe (Ojibway), Ininew (Cree), Oji-Cree, Dene, and Dakota, and Homeland of the Métis Nation. We echo the calls of Indigenous advocates and organizations for immediate and concrete action to better implement the National Inquiry into Missing and Murdered Indigenous Women, Girls, and 2SLGBTQQIA+’s 231 Calls for Justice and the Truth and Reconciliation Commission’s Calls to Action. We commit to reflecting this urgent need for action that centres the lives of Indigenous women, girls, and Two-Spirit people in our own work.

Indications that the alleged killer held white supremacist, misogynistic, and antisemitic beliefs are reminders that the pressing and very real violence with which Indigenous women, girls, and Two-Spirit people have contended continues. We join with others in pressing for a full investigation of racism and hate as motivations for these murders. To do so would be to honour and respect the truths many families shared during the National Inquiry about the ongoing and increasingly hostile and extreme forms of intersecting gender and race-based hate and violence they are regularly subjected to, and in keeping with the Calls for Justice.

As the Final Report of the National Inquiry makes clear all levels of government, as well as all sectors, institutions, organizations, and the general public, particularly those operating from a colonial framework who deliver services to Indigenous women and gender-diverse people, must be actively involved in the implementation of the Calls for Justice. In particular, we want to highlight the clear directions put forward in the Calls for Justice that action and funding must prioritize access to the basic necessities for safety (Calls for Justice, 4.1, 4.2), including affordable food, housing (4.6), and transportation (4.8), shelters (4.7), and transfer of control and resources for the delivery of Indigenous-led services (e.g. 2.5, 3.2). The continued and active exclusion of Indigenous women, girls, and Two-Spirit people from such basic human rights and services that many Canadians take for granted enables both individual and systemic violence against them.

The National Inquiry’s Calls for Justice, along with countless other reports and recommendations put forward over many years, clearly outline the steps that need to be taken to not only commit in principle but to take action and dedicate resources necessary to dismantling colonial systems, policies, practices, and relationships that continue to devalue the lives of Indigenous women, girls, and Two-Spirit people. As the families of the four women have expressed over the past months, with their loss also comes the loss of the possibilities the women’s lives held and the contributions they would bring to their families and communities. We grieve these losses, and we commit to doing the difficult and pressing work required to build relationships that prevent violence from continuing to diminish and rob Indigenous women, girls, and Two-Spirit people of realizing these possibilities.

If you or a loved one needs support:

The KUU-US Crisis Line Society provides a First Nations and Indigenous-specific crisis line available 24 hours a day, seven days a week, toll-free from anywhere in British Columbia. The KUU-US Crisis Line can be reached toll-free at 1 800 588-8717. Alternatively, call direct into the Youth Line at 250 723-2040 or the Adult Line at 250 723-4050, or online: kuu-uscrisisline.com. 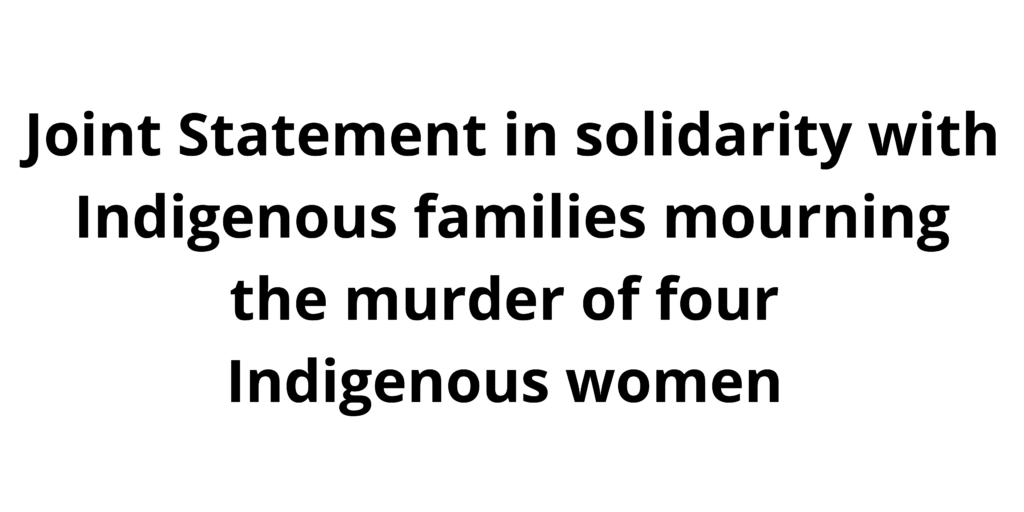