A child-care consultation earlier this year simultaneously included stakeholders from Yellowknife, Winnipeg and Toronto. Late last year, 36 youth held 25 meetings with MPs across eight provinces and territories to talk about how COVID is impacting their health, employment, and communities. Gender equity advocates from across the country spoke with Finance Minister Chrystia Freeland about the significant gendered impacts of the pandemic and how women have been impacted disproportionately from coast to coast to coast. These engagements happened without the need for a train or plane, having young people miss school or ministers, parents, and caregivers miss breakfast with their families. Virtual meetings with government, while clearly not a panacea, allow for more inclusive and accessible engagement, are more environmentally conscious and can support caregiving responsibilities. Let’s not go back to the way we did government relations pre-COVID.

Prior to the pandemic, phone and virtual meetings with politicians and senior members of government were often seen as second rate by government and many stakeholders alike. This resulted in Ottawa-based organizations having significantly more access to officials, with other organizations limited to those that could afford plane tickets for staff to attend in-person meetings, pay for government relations teams, or who were lucky enough to host a minister or MP while on tour. This can severely limit the ability for smaller organizations that may serve diverse equity-deserving groups in accessing and engaging governments, such as organizations that are led by or support 2SLGBTQIAA+ communities, people living with disabilities, Black, Indigenous, and racialized communities, newcomers, women, and gender diverse people. We can do better.

We believe that virtual engagements with politicians, their staff and government officials should be here to stay and seen as an equally worthwhile method to in-person meetings. While there are limitations which we briefly discuss below, virtual engagements have at least three important attributes that warrant them being part of how government engages with stakeholders moving forward.

Firstly, simply stated, virtual meetings with government can allow for more inclusive, accessible and authentic engagement. Rather than frontline and direct service voices being crowded out, healthcare workers, for example, can speak directly with the minister of health while on their lunch break and direct beneficiaries of Canada’s international development efforts can speak to the needs in their communities from halfway around the world. MPs and ministers can hold virtual office days that further this accessible and inclusive method and support homebound constituencies, as well as others, to virtually engage.

Secondly, if Canada is to significantly reduce our emissions to achieve our Paris climate commitments and transition toward a net-zero economy by 2050 as the Canadian Net-Zero Emissions Accountability Act legislates, each one of us needs to do our part. By maintaining virtual engagements as one of the primary tools in our political engagement toolkit, we can reduce our carbon footprints and support the achievement of our national and international climate agreements.

Finally, much conversation has centered on how difficult the pandemic has been for parents and caregivers, especially women who often perform the lion’s share of primary caregiving responsibilities. Over the last 18 months, parents and other caregivers have struggled, perhaps more than ever before, to balance family and work obligations. This has had wide ranging impacts on family dynamics, children’s and parents’ mental and physical health and economic productivity. Yet, for those privileged enough to retain employment through this difficult time and to be able to work from home, a silver lining has been more breakfasts and dinners with their family. Rather than Ministers, their staff and senior government officials constantly traveling across Canada and public policy and government relations staff following after them, let’s be open to real and authentic virtual engagement that keeps us home more often and allows for a greater work-life balance.

While we believe virtual government engagement is, on its whole, quite positive, it’s far from a complete solution and may exacerbate existing limitations to true government engagement if not undertaken thoughtfully. As others have noted, access to the tools and resources that allow for virtual government engagement are far from universal. While the federal government has committed to having 98 per cent of the country able to access high-speed broadband by 2026 and 100 per cent by 2030, the lack of access to internet and devices today will continue to leave far too many people out of the policymaking process, including low-incomes Canadians, people with disabilities, people with lived/living experience of the policy issue being discussed and Indigenous peoples. Importantly, governments continue to have a duty to consult Indigenous peoples and must continue to meet Indigenous peoples in ways that uphold and further these important relationships. Therefore, consideration must always be given to how to fully engage so as not to leave some communities behind.

Engaging with governments should never be a one-size fits all approach and should be an iterative process that looks to capture diverse communities at various stages of the policy development process. With careful consideration as to its limitations, we see virtual government engagement as an important tool for governments and stakeholders that share inclusion, environmental and caregiving goals and one that should outlast the COVID pandemic. 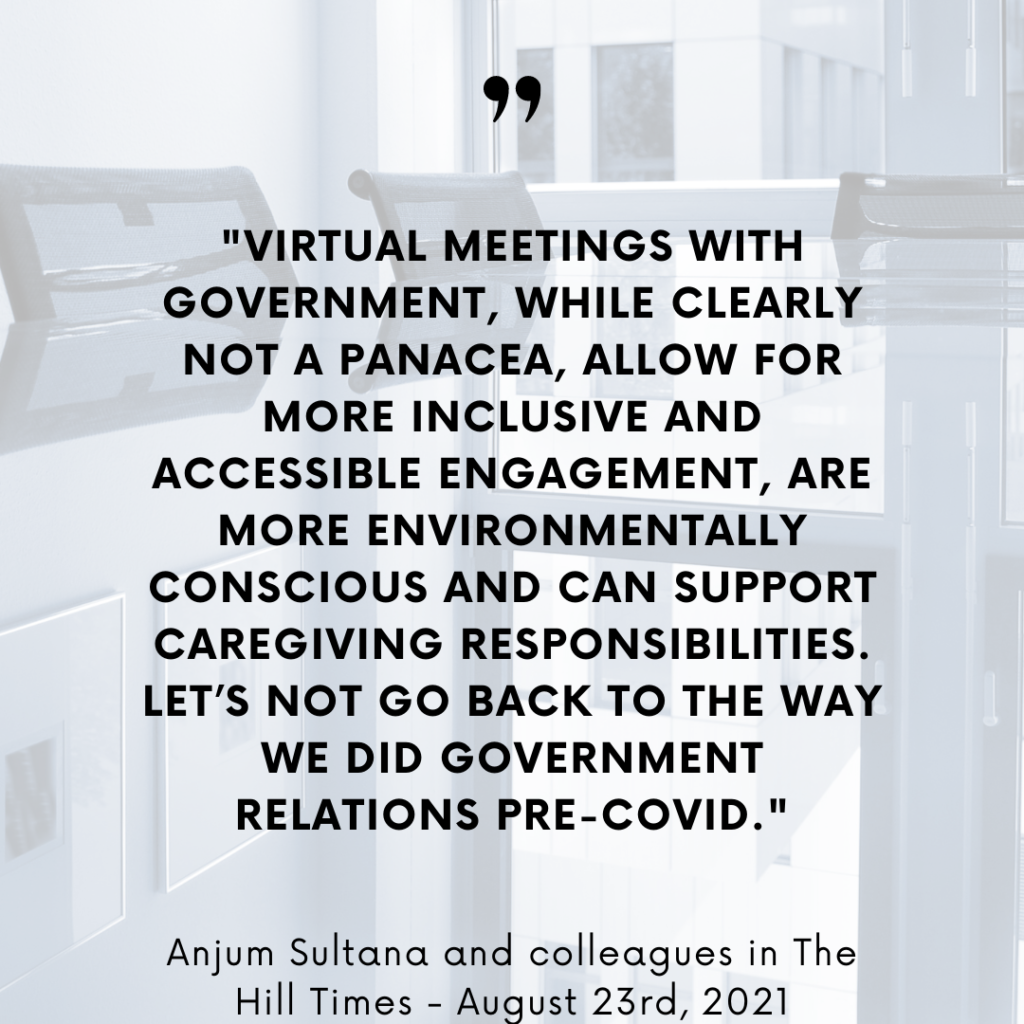