Youth Leadership and “The Art of the Clapback” | YWCA

Youth Leadership and “The Art of the Clapback”

Women aged 15 and up represent around half of Canada’s working population. Even though workplaces, as of 2016, are 47% women, it’s still a hard time to be a woman in the workforce. With various microaggressions keeping women back, who is there to teach women how to take what’s theirs?

That’s where alicia sanchez gill’s “The Art of the Clapback” session came in. She’s the Interim Executive Director of the Collective Action for Safe Spaces, and she was invited to the 2017-2018 Think Big! Lead Now! Young Women’s National Leadership Program to teach young women and non-binary youth how to stand up for themselves. She taught attendees how to ‘clapback’ at some of the negativity they may face in their work lives.

“A clapback is deemed by most as a targeted, often viciously acute and witty comeback intended to place someone in much-needed check. The goal of the clapback is to 👏Shut. 👏It. 👏Down,” she says.

What do clapbacks aim to shut down? Overt racism, sexism, and various microaggressions. She goes on to describe microaggressions as, “the everyday verbal, nonverbal, and environmental slights, snubs, or insults, whether intentional or unintentional, which communicate hostile, derogatory, or negative messages to target persons based solely upon their marginalized group membership.”

These can be; asking to touch a Black person’s hair or women, particularly those of colour, being stereotyped as angry, loud, or emotional.

Elham Numan, a 25-year-old artist and student who attended the Think Big! Lead Now! Summit says she wasn’t always able to explain why various situations would have affected her. “I always felt weird about certain things that people would say to me. I wouldn’t understand how to explain it. Examples of that would be commenting on my appearance or on my interests and how they might be different from other people’s. That’s something I grew and learned about before attending the conference, and then learning more about that kind of microaggression and speaking with other people who are like me. ”

Negative interactions aren’t limited to covert acts, as Tieja Medicine-Crane discovered in 2017. A 19-year-old Think Big! Lead Now! 2018 participant, her experience happened after a cowboys and Indians themed high school party. Medicine-Crane, who is First Nations, noted how disrespectful it was that students were dressed in war paint and headdresses. It was only after she ‘clapped back’ online that action was taken. “I essentially made a post saying why it was wrong, why you shouldn’t do that, and why it was disrespectful. There was a lot of backlash from it, but there was also a lot of support behind it, and the high school itself ended up having a seminar where they brought First Nations elders. They had speakers and conferences to educate the students on why they shouldn’t do that. After that, there hasn’t been one since in my city. ”

Medicine-Crane says she often experiences microaggressions at her retail job too. “I didn’t get promoted to be a supervisor for a long time. But all the supervisors at my work were men. Even now, my boss doesn’t listen to me as much as they listen to men who aren’t supervisors.”

sanchez gill says that this is not uncommon for young women in the workplace to experience. “There is a persistent, unconscious doubt about the ability of young women to take on leadership roles in their organizations,” she explains. “Our level of experience is questioned– even when we have a lived experience. People treat us like children, even when we are young adults.”

This is where young women have to learn to clapback at these experiences. The goal, according to sanchez gill, is to assert power, stand in solidarity, and assert your competency.

And just as importantly, she notes that cruelty is not necessary in these situations. “I prefer to maintain a certain code of ethics, even when clapping back. I’ll never be homophobic, transphobic, fatphobic, racist, etc. People often make the mistake of thinking that everything is fair game when beefing online (and in person, too).”

Since attending the session, Numan says she came out feeling well rounded, and with more resources on her hands to deal with these situations. “I know that sometimes when I have certain encounters either at school or within the workplace, I think back to the conversations or sessions that I’ve had with the other people who have attended the YWCA retreat. It’s benefitted me in more ways than one. I still think back to the weekend that we had a year ago and I think of how much fun it was, and how informative it was as well.”

Medicine-Crane agrees too, saying she feels like it has helped in her work life. “Before, there were certain things that I would let slide. Now I’m taken more seriously.”

As for women who haven’t attended the conference, Medicine-Crane has this to say of the conference and her experience. “It was a place that felt completely safe to be yourself and be any kind of woman that you identified as, and every kind of woman, no one was judged for who they are, and just to be yourself. It felt so safe there that I wanted every place to feel like that; every workplace, every school, every place in general for a woman to feel so safe and secure so you can be you. I would say just be yourself, don’t be scared to tell people when they’re wrong, or put people in their place when you know they’re doing something or saying something wrong. Don’t be scared of the backlash that you’re gonna get from it because in the end, the backlash doesn’t compare to the support that you’re going to get from your fellow women.”

Grounded in intersectional feminism and social justice, YWCA Canada’s Think Big! Lead Now! Young Women’s National Leadership Program  has been designed for young women and non-binary youth aged 18 to 25-year-old living in Canada. This comprehensive and bilingual leadership program includes online learning sessions and panels, self-study, peer mentorship and support, and civic engagement activities along with a three-day immersive training and networking summit taking place in January 2020. For more information, contact us at projects@ywcacanada.ca. The application deadline is May 20 at midnight EST. Several bursaries are available to encourage barrier free access to this opportunity.

Funded by the Government of Canada and RBC Foundation. 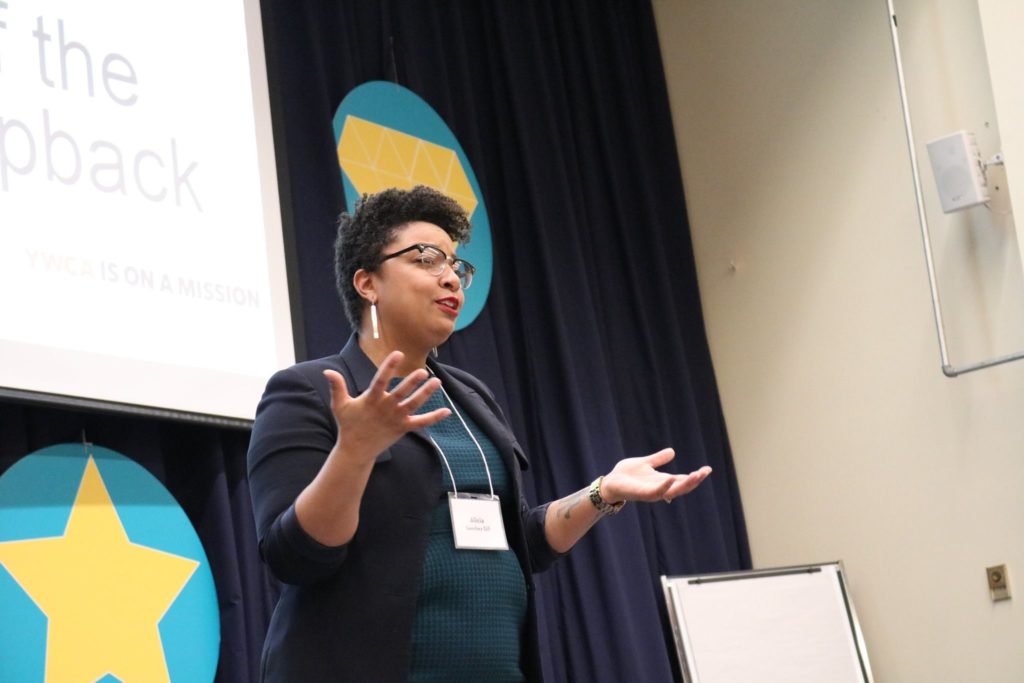