YWCA Canada is a leading voice for women, girls, Two-Spirit and gender-diverse people. For over 150 years, we’ve been at the forefront of a movement: to fight gender-based violence, build affordable housing and advocate for workplace equity. We work to advance gender equity by responding to urgent needs in communities, through national advocacy and grassroots initiatives.

Where The Money Goes 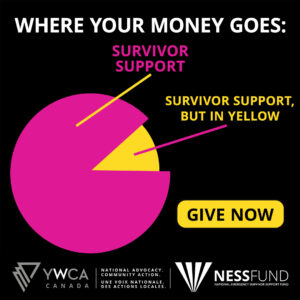 Since early 2020, the number of reported instances of intimate partner violence skyrocketed an alarming 30% in what is now being called a “shadow pandemic.”
Leaving is hard, but it’s not always the hardest part. Survival takes time — and it takes trust. We need to do more than just believe survivors; we need to invest in their survival.

FAQS About YWCA Canada and The NESS Fund

How big is the need?

Big. So big, in fact, that within four months of the Funds’ launch, 5 of the 12 participating YWCA locations ran out of money. Furthermore, all 12 locations had received far more applications than they could support.

Reported instances of intimate partner violence have skyrocketed 30% since the pandemic began and the need for support is overwhelming. We’ve reached a tipping point.

Where does the money go?

The money goes directly to survivors. because a lack of financial resources is one of the most common reasons survivors stay in abusive situations.

Are there other ways survivors are supported?

Survivors will also be connected to wrap-a-round transition services including counseling, connections to healthcare, employment, and legal assistance as needed.

Which YWCAs are offering the NESS Fund?

Many YWCAs across Canada are currently offering The NESS Fund, with more to come as resources become available.

Is The NESS Fund Offered In Other Regions?

No, not currently. As we raise more funds, we will expand the NESS Fund to more regions.