YWCA Canada has launched a campaign educating people about the potential risks of sharing other people’s intimate images without their consent. This is to raise awareness about cyberviolence and their campaign falls within the 16 Days of Activism Against Gender-Based Violence.

YWCA Canada hopes their “Intimate AirDrop” campaign will spark conversations about online image sharing and gender-based violence.  The campaign work is in line with Project Shift, a multi-year project working to create a safer digital world for young women.

So far, the not-for-profit has organized a focus group with people in Vancouver as a popular education activity. They are doing this to raise awareness and educate people on the impact that non-consensual images can have on survivors, and on perpetrators as this is a criminal act.

According to a MediaSmarts report on Canadian youth, roughly one in six participants had a unsolicited ‘sext’ they sent forwarded electronically or shown to someone in person without their consent, and just over one in ten had posted to a public space. YWCA Canada is interested in collaborating with other groups to raise awareness on campuses across Canada.

“This is a simple way to talk about a serious subject for people” says Maya Roy, CEO at YWCA Canada. “Our campaign is about consent culture and accountability. It is about raising awareness and education because non-consensual sharing of images is against the law. More importantly, there are long-term impacts on survivors from mental health concerns, to employment security to staying in school. We all have a role to play, let’s stop the practice of sharing images without consent.”

About YWCA Canada: YWCA Canada is the country’s oldest and largest women’s multi-service organization. YWCA works in 300 communities across Canada to serve women and girls in nine provinces and two territories. YWCA Canada is the nation’s single largest provider of shelter to women and children fleeing violence. For more information visit www.ywcacanada.ca or find us on Twitter @YWCA_Canada

Click her for a Frequently Asked Questions on this Campaign. 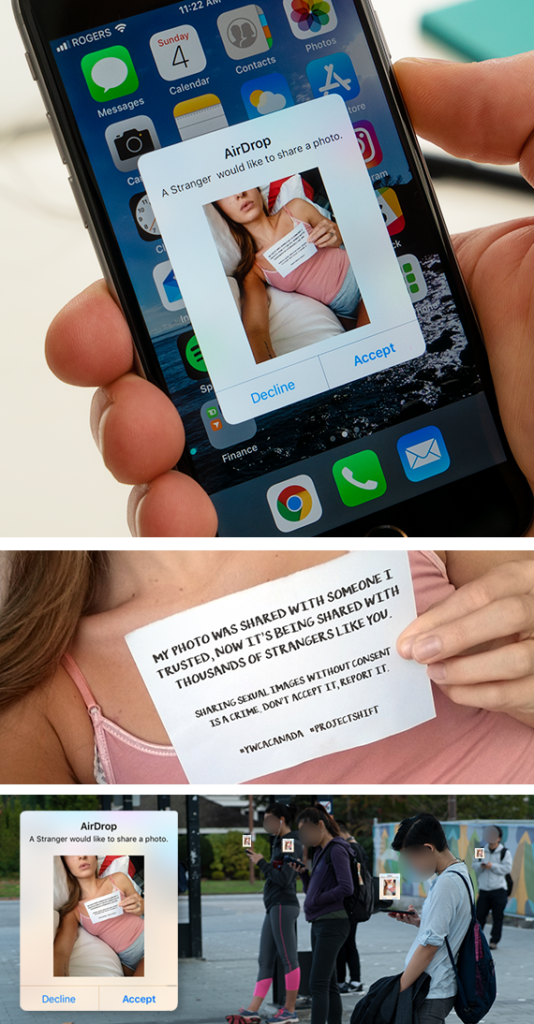