During the 2019 federal election, the Up For Debate Alliance is calling on all federal party leaders to commit to a national televised debate to share their priorities on women’s rights and gender equality.

The leaders of the NDP and the Green Party have pledged to participate, but we’re still waiting on a commitment from the Liberals, the Conservatives, and the Bloc Québécois.

Tell the Liberals, Conservatives, and the Bloc Québécois: We DEMAND a Federal Leaders’ Debate on women’s rights and gender equality

And yet, women, trans, non-binary, and two-spirit people in Canada still face many of the same barriers today, including:

Take action today! Tell the Liberals, Conservatives, and the Bloc that gender equality and women’s rights will be on your mind when you head to the polls. 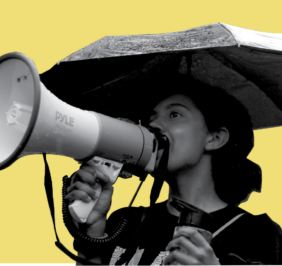 Up for Debate Mobilization Toolkit

Up for Debate 2019 is a campaign coordinated by an alliance of women’s rights and gender equality advocates from across Canada. We are dedicated to organizing on principles of human rights, equality, and inclusion.

Why We Are Up For Debate

Up For Debate 2019 is calling on all federal party leaders to participate in a national televised debate on women’s rights and gender equality.

Up for Debate 2019 is advocating for federal leadership to create a world where social movements and women’s rights organizations are supported, poverty is eliminated, and women, trans, non-binary, and Two Spirit people live free from violence.

We want all federal party leaders to tell Canadians what their positions are on women’s and gender equality issues.

The Alliance for Women’s Rights and Gender Equality and Endorsers of the 2019 Up For Debate Campaign include: